We advised and delivered three different football inflatables to the KNVB Voetbalkampen in 2019, one of the biggest youth soccer camps in the Netherlands. This popular camp has been organized each year during the May, summer and autumn holidays in the middle of the Netherlands at the KNVB Campus, the home training ground from the Royal Dutch Football Association and in specific first men and woman team. Close to the May edition, the KNVB Voetbalkampen received among others their own 5 meter high football darts attraction a d a three in one inflatable court. 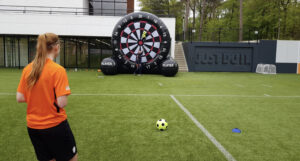 Next to the inflatables the KNVB Voetbalkampen are using the Elite Skills Arena ICON Fast Feet each year. As a partner of the Royal Dutch Football Association, the Dutch telecom company KPN sets up their own branded 6 panel ICON, which has been used each holiday camp at the KNVB Campus from 2018. 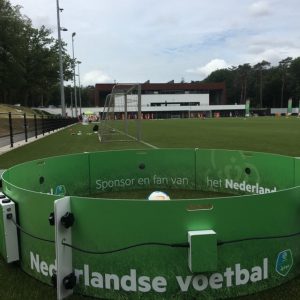